What’s Happening in Traffic This Week

In the coming weeks, motorists can expect lane closures along Old Banff Coach Road S.W. as work continues on the detour road. Please look for electronic signage for notifications.

Trans-Canada Highway Reduced to One Lane

Later this week, there will be right lane closures both eastbound and westbound along the Trans-Canada Highway.

For several nights this week, between 10 p.m. and 6 a.m., traffic exiting from eastbound Trans-Canada Highway to northbound Stoney Trail will be rerouted to Bowfort Road N.W.

You may have noticed some new plantings and containers around the community. Let’s give a big shout out to our volunteers who spent the Canada Day weekend tending to our trees, planting the flowers, and creating the beautiful arrangements in the planters and pots at the North Gate and in and among our common areas.
Thank you to our Beautification Team: 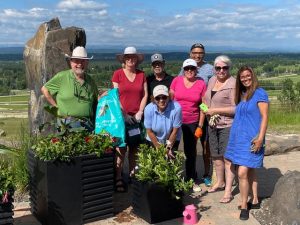 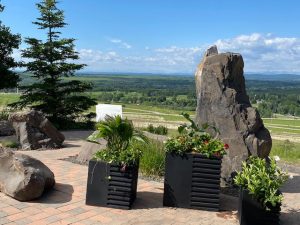 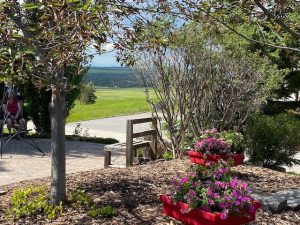 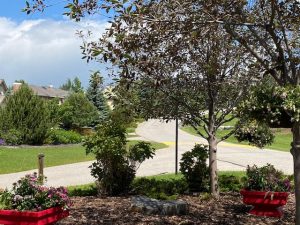 We just received some very good news resulting from our efforts to ensure that the proposed Enmax Transmission lines are built on the south side of Highway 8, closer to Discovery Ridge (Enmax’s preferred route, noted in orange below), rather than close to the Slopes which was Enmax’s alternate route (purple below). 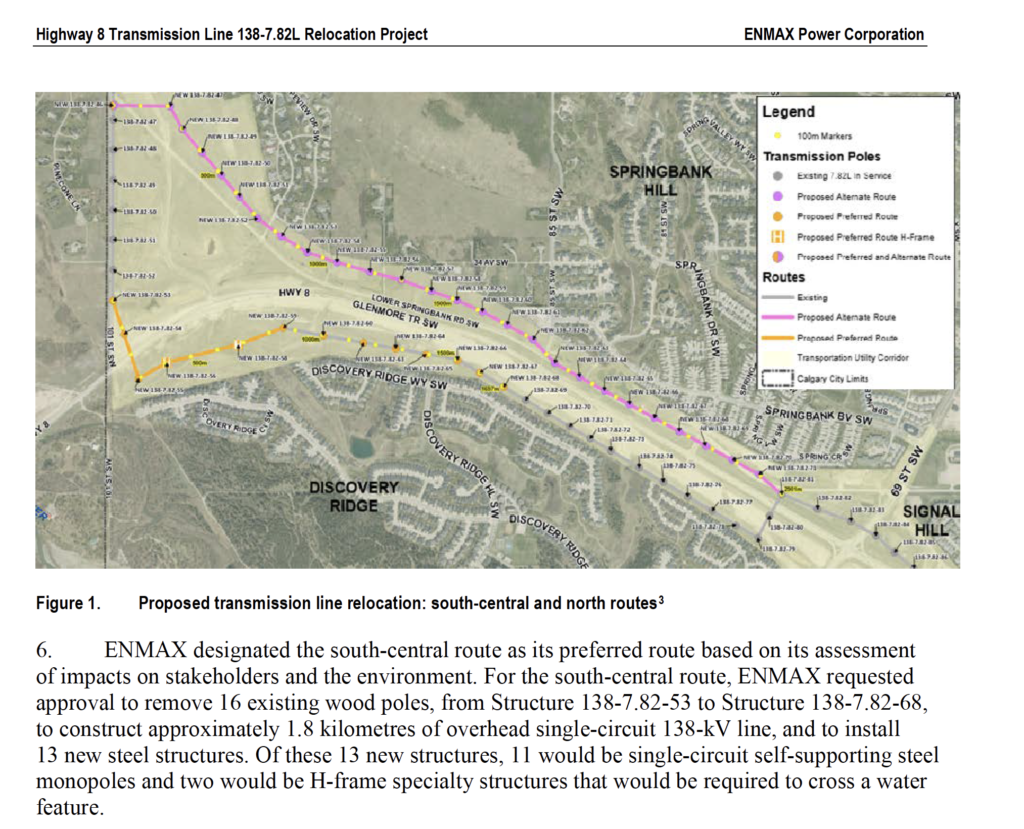 The Decision summary is as follows and the Decision is attached below:

Decision summary
1. In this decision, the Alberta Utilities Commission considers whether to approve an application from ENMAX Power Corporation to alter and operate Transmission Line 138-7.82L near Highway 8 in the southwest quadrant of the city of Calgary.

2. After consideration of the record of the proceeding, and for the reasons outlined in this decision, the Commission finds that approval of ENMAX’s preferred route is in the public interest, having regard to the social and economic effects of the project and its effect on the environment, in accordance with Section 17 of the Alberta Utilities Commission Act.

We wish to give a huge shout out of thanks to all those who worked so hard on behalf of The Slopes Community. Thank you to all who participated and provided support, attended Enmax open houses and the AUC Hearing, and who wrote letters to bolster The Slopes case to have the transmission lines located along Enmax’s preferred route. We owe them a great round of applause for their efforts to maintain our property values and free from unsightly transmission lines.

The 2015 Alberta Budget cut about $1.5 billion from existing ring road spending plans by delaying the west leg of the Ring Road for up to 10 years, which the government had initially planned to start building in 2017 and have finished by 2021.

The Slopes Community Association has been working on your behalf to ensure that the integrity, value and enjoyment of our property is protected from the construction of the West Calgary Ring Road.

On Friday the 28 of June 2019 a delegation from the Slopes, Discovery and Springhill communities met with the Honorable Ric McIver Minister of Transportation Alberta, MLA Mike Ellis and City Councilor Jeff Davison at the McDougal Building or Government House South to discuss issues with the South West Calgary Ring Road and West Calgary Ring Road.  (SWCRR, WCRR)

The three communities met on several occasions prior to this meeting and worked together to present a coordinated cooperative approach to ensure all the communities had their concerns addressed and would speak with one voice.   Also in attendance at the meeting were the project engineer of the SWCRR and the assistants for all officials.

The following issues were discussed:

1)      The impacts of the intersection of Highway 8 and the WCRR.  We asked that the one crossover bridge be eliminated to lessen the impact on all three communities.  i.e. eliminate the need for a triple over pass.  This would be by way of simplification of traffic flow in separate directions (west and north) starting as far back as west of 69 street and highway 8.  This will eliminate the need for the third level of a bridge deck.  The height of a three level bridge structures would unnecessarily impact the south end of our community the most.

2)      That the berms be built near the roads for maximum noise attenuation.  This in order to deflect the road noise as soon as possible and to deflect it in an upward direction verses a directional direction.  We have received assurances that berms will be built but we need to make sure that these need to be constructed next to the road.

3)     That an access ramp from 17th onto northbound WCRR be incorporated in the design of the WCRR.   We don’t want to drive through other communities to get on to a new Ring Road.  With the design solution as suggested to the minister we all should have access to the WCRR traveling northward.

4)      The environmental impact of the Design Build (DB) and the inevitable construction will bring issues such as dust, noise, and hours of operation to the fore front. We have had the impact of the hauling road for two years presently and the Minister told us that he hopes not to go into 2023 for the completion of the WCRR.  We asked that these items be seriously considered as preventive measures sooner, rather than later.

5)      The wetlands that will be lost due to the WCRR construction are to be relocated but this should still be in the local area to the east side of the “to be“ constructed WCRR.  Rebuilding wetlands near our community is the rightful thing to do.  The Slopes drains presently into the wet lands below on the other side of Lower Spring Bank Road.

6)      That the pathways alignments be determined at the time of the WCRR design and to be incorporated into the whole Calgary pathway network to provide continuity.   Into Discovery, West Hills and the new City park (Clearwater) on the west side of 101 Street S.W.

7)    In particular we wish to see the same sound attenuation policies as those applied to Highway 8 near the Slopes as the Glenmore Trail, East of Sarcee Trail. We do not understand why the same road has different standards.   The Slopes community is located in Calgary and should be governed by the same standards as other City properties which have more stringent sound attenuation standards. A special designation has been asked for and will be brought up in future meetings.

Many thanks to the sub committees of the Slopes Association Boards and community members for the years of hard work by volunteering and attending meetings with advice, suggestions and solutions, forward thinking on potential engineering studies on green power, engaging and obtaining a power line planner for an potential eventual AUC hearing, culminating in this very important meeting and presentation of all of our concerns with the Alberta Transportation Minister Ric McIver, MLA Mike Ellis and City Councilor Jeff Davison.

Slopes Board has been working hard and closely with officials from the City and the Province to lift the restrictions being imposed on the use of our community’s South Gate from the 31st of December 2019.

We wish to inform the community, that the City has acknowledged our concerns and has been working closely with Alberta Transportation (AT) and its Ring Road team. AT has advised that, while the gate needs to be removed, they will not restrict the access to the Slopes community through until Spring 2020. The South Gate will remain open.

During this time the City will work closely with AT and continue to advocate a solution that meets the needs of all parties. The City has already started working with its Planning Department to help identify, plan, and design solutions to ensure that The Slopes continues to have two entrances and exits to the community that are accessible, in particular to school buses, emergency vehicles, and other local traffic..

Thank you for your overwhelming support to ensure that The Slopes gains both a temporary and permanent access through a South Gate. A sub committee of the Board, met with Jeff Davison on November 21 and provided a presentation outlining our concerns and goals. We look forward to updating you on the outcome of this meeting and the actions that will be taken to ensure our South Gate access.

Click here to view our presentation to Councillor Davison

The City has already started working with its Planning Department to help identify, plan, and design permanent solutions to ensure that The Slopes continues to have two entrances and exits to the community that are accessible, in particular to school buses, emergency vehicles, and other residential traffic.

The process for a new south access point has begun. The Board has received notification from Alberta Transportation that the physical gate barrier on our south side must be removed from its current location within the next few days, due to expiry of the associated lease.

Although the physical gate will be removed from its current location in the next few days, access to Lower Springbank Road from the south end of Slopeview Drive will continue uninterrupted until April 2020.

When the community learned that as of December 31, 2019 we would no longer have access to our south exit because of the construction of the West Calgary Ring Road, the Board established The Slopes South Gate Access Committee. The role of the committee was to negotiate with the City of Calgary and provincial government to ensure our access through a new south gate continues in the best way that services our community (such as school buses, emergency vehicles, deliveries, and regular traffic).

During our negotiations, we learned that the ultimate responsibility for the design and development of the new south exit lies with the City of Calgary, Planning Department. We are pleased to report that at our last meeting with City Planners the following option met with most agreement from all parties.

“The emergency access includes a gate on private land that functions in the same manner as the previous gate and the standard emergency access locked gate would be removed. It would provide a visual barrier but it would open for any vehicle that approaches.”

The City has agreed that the Slopes requires a second point of emergency vehicle access.  This emergency road will require a development agreement with the City to ensure an access agreement is in place across lands that are not a legal road right of way.  The City has agreed to support and work closely with The Slopes community to obtain this permit as and when required. Alberta Transportation has indicated our south access will remain throughout the construction period.

We will continue to update the community on timelines of construction, permits, traffic flow during construction and new gate installation.

We are deeply grateful to all members of the community who signed our petition to keep our south access.

Thank you to all who were involved in the negotiations:

There are no upcoming events at this time.